THE GLEN OF IMAAL TERRIER 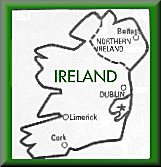 There is evidence that the Glen of Imaal Terrier is a centuries-old breed, but until recently it has not been well-known even in its native country. It originated in a place called the Glen of Imaal in County Wicklow, Ireland.

Serving as all-around farm dogs, to guard and work livestock, to eradicate vermin, to hunt fox, badger, otter, mink, and so on, these earth dogs (terriers) were also reputedly used to turn kitchen treadmills, spits and churns, and in dog-fighting.